Perseus and the Legendary Rescue of Andromeda: Slaying of a Dangerous Sea Monster

It is an epic tale that would stand the test of time and would later be immortalized by Hollywood. Among its mythology there is one specific episode that has stood out from the rest; that is, Perseus’ confrontation with the legendary beast threatening his future wife, Andromeda, and the kingdom of Ethiopia.

Ethiopia was ruled by king Cepheus and his wife Cassiopeia.

“[Cassiopeia] vied with the Nereids in beauty and boasted to be better than them all; hence the Nereids were angry, and Poseidon, sharing their wrath, sent a flood and a monster to invade the land. But Ammon having predicted deliverance from the calamity if Cassiopeia's daughter Andromeda were exposed as a prey to the monster, Cepheus was compelled by the Ethiopians to do it, and he bound his daughter to a rock.”

The Feats of Perseus

During his journey and following his slaying of the gorgon, Medusa, Perseus saw a naked Andromeda chained to a rock as an offering to this monstrous creature. He immediately fell in love with her and vowed to destroy the creature. Perseus accomplished this task and set Andromeda free, later marrying her. In one telling, Perseus drove his sword into the creature’s back while in another, he used the head of the Medusa to turn it to stone. 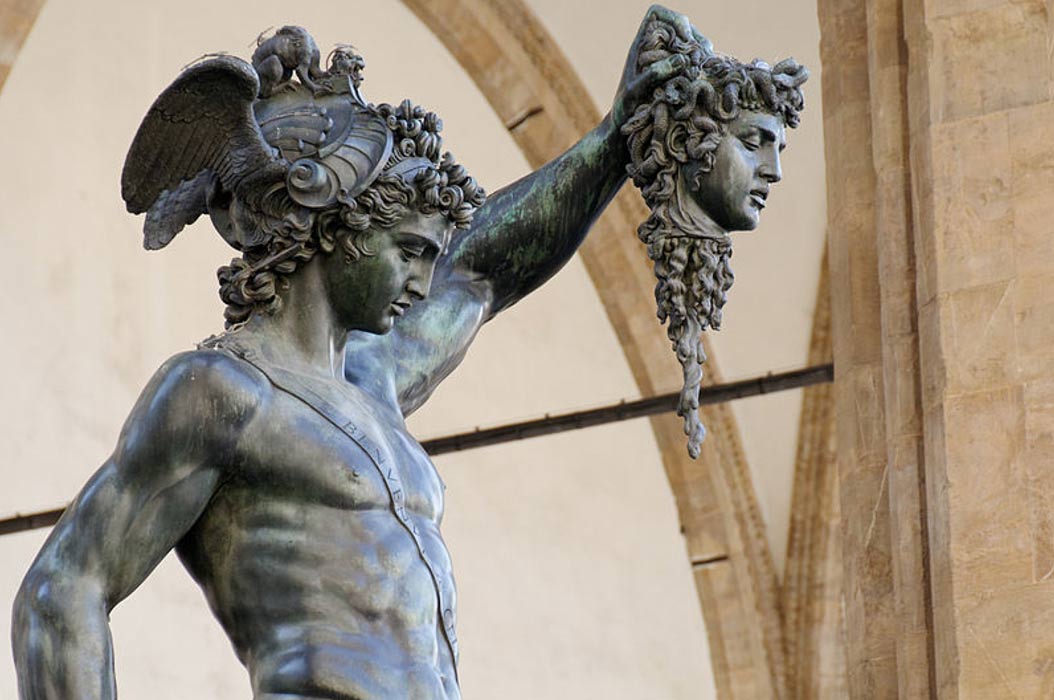 The legends surrounding Perseus are preserved in the writings of both Pausanias (ca. 110 – ca. 180 AD) and Pseudo-Apollodorus (1st or 2nd centuries AD). His story ends with his founding of Mycenae and the establishment of the Perseid Dynasty.

The very same Mycenae which would eventually be the home to the Atreid Dynasty and house the throne to the ruthless Agamemnon. For those not well versed in Greek mythology, Agamemnon was the Mycenaean Greek monarch who led a thousand ships to Troy, where the decade long Trojan War was fought in approximately 1200 BC.

Ancient and Hellenistic tradition link Jaffa or Iopeia (modern day Tel Aviv, Israel) to the name Cassiopeia, the mother of Andromeda. Settlement in Jaffa dates as far back as the Near Eastern Bronze Age (3300 - 1200 BC) and is firmly situated along the Levantine coast. It served as a port city since antiquity, and was written about in ancient texts as early as the 15th century BC, some of which are preserved in the 14th century BC Amarna Letters (Yapu, EA 365). The city remained under Egyptian control until approximately 800 BC. Near the harbor of the city, there exists an outcrop of rocks which have been associated with the place where Andromeda was chained.

Red water, in color like blood, is found in the land of the Hebrews near the city of Joppa. The water is close to the sea, and the account which the natives give of the spring is that Perseus, after destroying the sea-monster, to which the daughter of Cepheus was exposed, washed off the blood in the spring.
– Pausanias, Description of Greece, IV.35.9

Some again would transport Ethiopia into our Phœnicia, and make Joppa the scene of the adventures of Andromeda; and this not from any ignorance of the topography of those places, but by a kind of mythic fiction similar to those of Hesiod and other writers censured by Apollodorus, who, however, couples Homer with them, without, as it appears, any cause.
– Strabo, Geography, I.2.35.

Now Joppa is not naturally a haven, for it ends in a rough shore, where all the rest of it is straight, but the two ends bend towards each other, where there are deep precipices, and great stones that jut out into the sea, and where the chains wherewith Andromeda was bound have left their footsteps, which attest to the antiquity of that fable.
– Josephus, The Wars of the Jews, III.9.3 The most interesting part of Jaffa is not its association to the Perseus sea monster but to other sea monsters. Mentioned in the Hebrew Bible, the prophet Jonah embarked from Joppa (i.e. Jaffa) for Tarshish.

1:1 Now the word of the LORD came unto Jonah the son of Amittai, saying:

1:2 'Arise, go to Nineveh, that great city, and proclaim against it; for their wickedness is come up before Me.' Jonah and the Whale (Public Domain)

Conjured up by God, a bad storm resulted in the ship and its crew being cast into the sea and a giant sea monster swallowed up Jonah.

2:1 And the LORD prepared a great fish to swallow up Jonah; and Jonah was in the belly of the fish three days and three nights.

2:2 Then Jonah prayed unto the LORD his God out of the fish's belly.

Dag Gadol, the Hebrew term used to describe this sea creature, translates to a great fish. The later compiled Greek Septuagint would translate this to the equivalent κητος μεγας (ketos megas). This is a very important clue as the Greek word for fish (or ketos) is used here. This is the equivalent of the Latin cetus. The name of the constellation Cetus also derives from this word. Ketos was a common word to denote a large fish, whale, or shark. Coincidently, ketos is used to describe the sea monster sent by Poseidon to Aethiopia and it is the ketos that Perseus slays to save Andromeda.

Releasing the Myth of the Kraken

Coupled with the infamous quote, “Release the Kraken”, the film industry has led us to believe that it was a kraken, or a giant squid like creature threatening the ancient town. The reality however, alludes to something entirely different. What was this sea creature killed by Perseus? 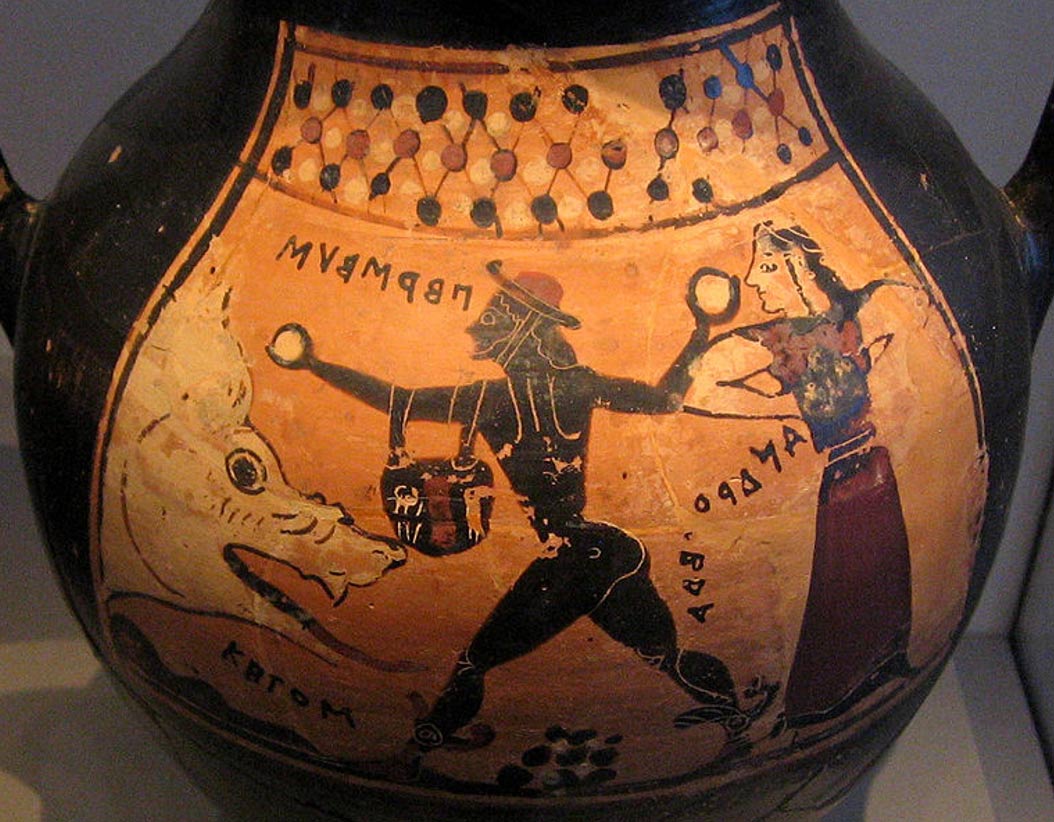 In 58 BC, the Roman politician, Marcus Aemilius Scaurus, as aedile, organized the extravagant Aedilician Games. The aediles (from aedes or “temple building”) were responsible for maintaining public buildings and regulating public festivals. Scaurus was the son of the Roman consul (a high ranking political office of the Roman Republic) of Marcus Aemilius Scaurus (ca. 163 – 89 BC) and Caecilia Metella Dalmatica.

Scaurus was described by Pliny the Elder (ca. 23 - 79 AD) to have been the first Roman collector (Natural History XXXVII.5). One of the largest attractions in the above highlighted event were the exotic animals exhibited in the circus and in an artificial lake. The greatest curiosity presented was that of a large skeleton from Joppa, claiming to be the same sea monster exposed to Andromeda (Natural History IX.4):

“M. Scaurus, in his ædileship, exhibited at Rome, among other wonderful things, the bones of the monster to which Andromeda was said to have been exposed, and which he had brought from Joppa, a city of Judæa. These bones exceeded forty feet in length, and the ribs were higher than those of the Indian elephant, while the back-bone was a foot and a half in thickness.”

Based on Pliny’s description, many have interpreted this skeleton to that belonging to a whale—more specifically a sperm whale. Sperm whales were not an uncommon observation along the Levantine coast and especially in Jaffa. This specific sperm whale however, may have been the remains of a sick or dying whale that beached itself. 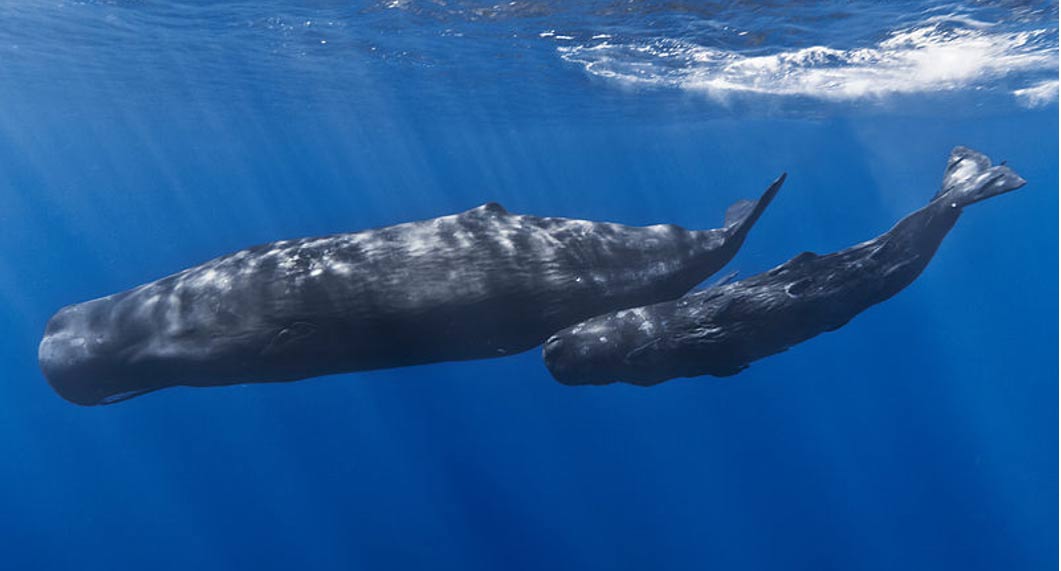 A mother sperm whale and her calf off the coast of Mauritius. (CC BY-SA 2.0)

Being charged by Gnaeus Pompeius Magnus or Pompey the Great (106 – 48 BC) to become his military tribune with the responsibility for the Judean region during the Third Mithridatic War (73 – 63 BC), it was probably not too difficult of a task for Scaurus to gain possession of such a specimen.

It is the male of the species which have been documented in displaying acts of aggression toward other whales and sometimes humans. Male sperm whales are known to show aggression toward other male sperm whales. In recent centuries, mostly from the 19th century CE, there have been recorded cases of male sperm whales attacking large (sometimes whaling) ships. The hypothesis has always been that these large ships appeared as a competitive males to the sperm whale. In some cases, these whaling ships were at the time hunting one or more smaller females of a pod. It is understandable that a nearby male would assume that the threat may be another male.

In the past, I have gone so far as to suggest that the Mesopotamian primordial deity, Tiamat, was symbolic of a whale. She was often described and depicted in cylinder seal impressions as a sea monster. In the Babylonian epic of creation, the Enûma Elish, the hero Marduk slays this sea creature, thus creating the known world for both gods and men. The theory is that this epic battle between the two mythological characters can be observed in our constellations of Orion, the hunter, and Cetus. With this in mind, it would not be too difficult to imagine that whales may have inspired other stories and legends from our past.

So, we come back to our initial question, did Perseus slay a giant whale or something else entirely different? Our evidence seems to indicate that it was nothing more than a sperm whale that may have terrorized the inhabitants of an ancient city. Coincidently, the tale of Moby Dick was too inspired by a sperm whale.

Petros Koutoupis is an independent researcher and author whose focus has always been on Late Bronze and Early Iron Ages of the Ancient Near East. He can read more about him and his research at www.petroskoutoupis.com.