That is one of the greatest doubts of archaeology. On this subject a fervid debate among scholars originated, which has long slowed (and at times even impeded), objective analysis of the pyramid complex. Still, nowadays, any conclusion can be appreciated as a milestone towards the comprehension of a complex civilization, which inhabited the territories along the Nile during the dynastic, and especially the pre-dynastic, age.

It is undeniable that Egyptology has greatly contributed to our knowledge of a unique and incomparable civilization, incredibly developed socially, artistically and scientifically. Unfortunately, Egyptologists have also persisted in misattributing some archaeological finds to Dynastic Egyptians, which I believe have little to do with that civilization. This has created confusion among researchers and has affected our comprehension of the prehistory of Egypt.

Still unresolved remains, for example, the dispute over the Great Pyramid. While academics agree to confine its construction to the Fourth Dynasty, I believe that their position conflicts with more scientific evidences I observed in the last 15 years of studies on this subject. The Sphinx and Great Pyramids of Egypt. Source: BigStockPhoto

The Great Pyramid and Khufu are Still Mysteries?

From the beginning, the Giza Plateau was considered one of the greatest dilemmas of ancient Egypt. It's undeniable that the Sphinx and the Pyramids are monuments technically conflicting with a civilization that scholars describe as "semi-primitive". In fact, as scholars stated - in 2,450 BC - Egyptians had acquired the primordial knowledge of agriculture, still they hadn’t yet discovered the wheel and they had very primitive copper and wood tools.

So, the questions are: how did they build the Pyramids? Is it a certainty or a necessity to state that Khufu's workers built the Great Pyramid? What evidence connects Khufu to the majestic building of Giza?

These questions require a very cautious approach, because it's a thorny problem that could upset consolidated stereotypes. Building bridges between different points of view it’s never easy, but trying is not evil!

In order to better understand the theories proposed, let’s check why the Great Pyramid is considered Egyptian Pharaoh Khufu’s Tomb. What evidence exists?

This may sound strange but there aren’t solid proofs that the Great Pyramid was built during the Fourth Dynasty (2620-2500 BC).

Despite some Egyptologists imposing certain rules and areas of thought, research goes on to find out the truth of the events characterizing Egypt’s distant past. 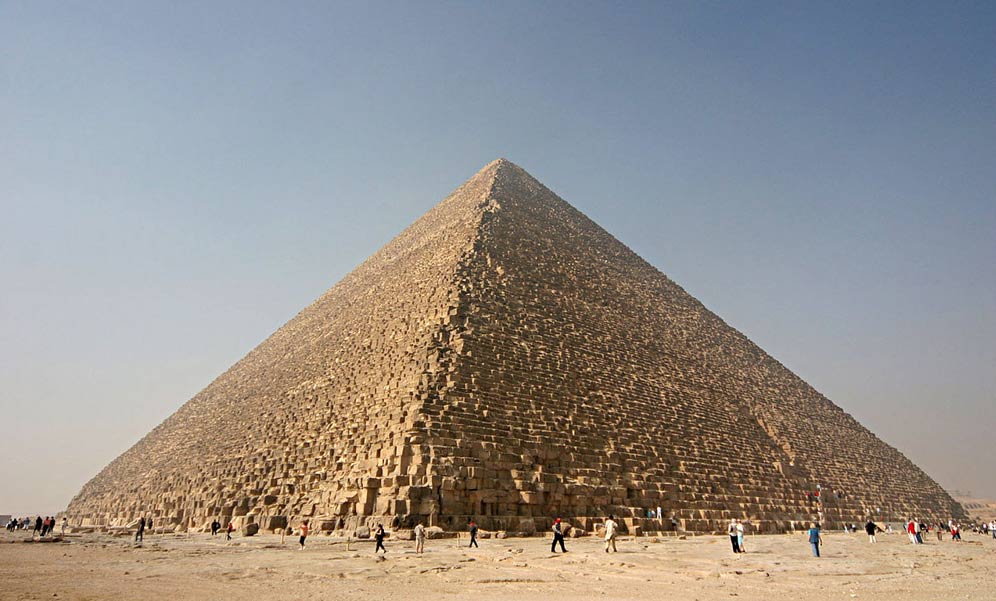 The enigmatic Great Pyramid, attributed to Pharaoh Khufu. (CC BY 2.5)

Egyptologists claim that Khufu’s workers made one of the wonders of the Ancient world, but…

Khufu in the Pyramid?

So, why is the Great Pyramid still considered to be the last abode and resting place of Khufu by Egyptologists?

In these two points all the Egyptologists’ proofs about the Great Pyramid are enclosed. There aren't other facts confirming scholars' conclusions.

It's too few facts to plan a correct theory without any doubts.

Because of the pyramid’s shape, many conjectures have been made concerning the origins of the building, conflicting with academic proposals. Was it a tomb? Was it built by an ancient civilization that lived in Egypt before the flood?

Proposals have originated from scientific studies of the Great Pyramid since the 19th century. Researchers have noted a lot of relationship between the Pyramid and mathematics for example, but also a perfect knowledge of the geographical orientations. For instance:

1) In 1859, John Taylor, an English publisher and writer, in his book "The Great Pyramid", argued that the monument base and height are in relationship with pi (π).  As well, the King Chamber was built in relationship to pi. As noted, the number pi was calculated by classic Greeks around the sixth century AD. May it be considered an empiric coincidence, or an accurate will of the builders?

2) The Great Pyramid is perfectly aligned to cardinal points. Many scholars have stated that the merkhet - a typical Egyptian timekeeping tool - was used to determine north through a constant astronomical observation. Was this enough to perfectly align the monument? And, above all, why would a semi-primitive culture have needed to align its monuments to the cardinal points and to the stars? Was it an ancient legacy?;

3) The pyramid’s base is a perfect square and its angles are perfectly 90°. After two centuries of Egyptology, it's always so hard to conceive a civilization having such a perfect concept of the geometry.

Many doubts give rise to suspicions that Egyptology is moving towards an incorrect solution to the pyramid mysteries. These extremely week proofs are accepted as logical and correct reconstructions of events which led up to the Fourth Dynasty.

There is no proof about a possible connection between Khufu and the monument, for the many geometrical and astronomical connections with the pyramid... and, above all, for a perfect knowledge of engineering.

Could Egyptians have done this kind of job? How could they have built Pyramids?

In 1850, Auguste Mariette discovered one of the most controversial finds ever unearthed: the Inventory Stele. According to the ancient text, the Great Pyramid and the Sphinx were already built when Khufu ruled over the Egypt. So, did Khufu’s workers only do the work of maintenance? Did they, or did they not, build the Great Pyramid? According to results of my research, Khufu was not the "father" of the Pyramid. A very easy analysis can help to find out the truth about the Egyptian past.

Egyptologists declare that the monument was built to preserve the mummified body of the pharaoh waiting for resurrection. An essential condition is to bury the body under the ground. If we take a look at the arrangement of the chambers inside the Pyramids, nothing seems to be working to these ends.

According to the claims of Egyptologists, first was built the Subterranean Chamber in which to place the sarcophagus. Then, Khufu changed his plan and the upper chambers were then built; the Queen Chamber and then, after a new change of plan, the latest and the so-called “King Chamber” were added where, actually, a kind of granite sarcophagus lies. 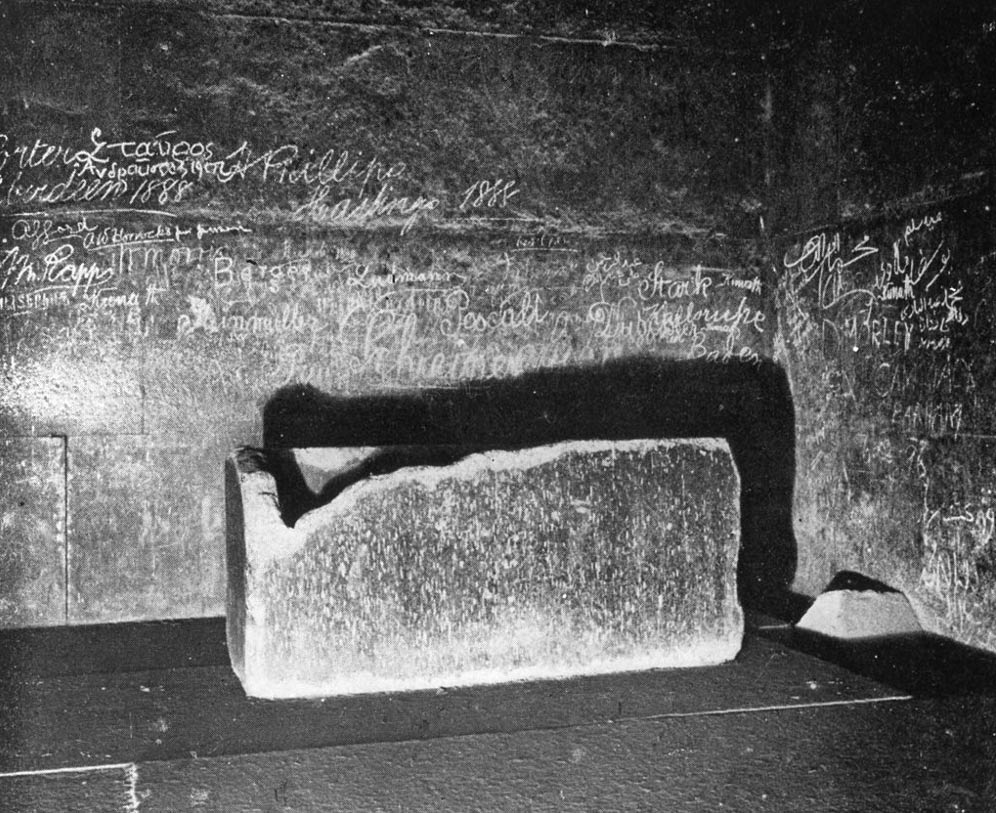 The sarcophagus in the King’s Chamber. Graffiti from the 1800’s cover the walls in this photo. (Brooklyn Museum/Public Domain)

These plan changes are the real mystery that pushes the balance needle towards careful and unexpected considerations. Why is this? 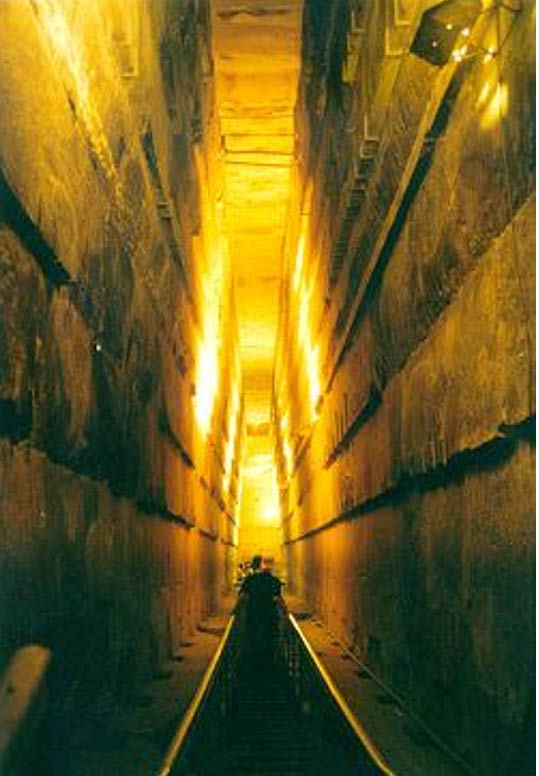 The Grand Gallery of the Great Pyramid of Giza. (CC BY-SA 3.0)

Because, in the Ancient Kingdom, the most important funerary rule was: “474 - The spirit belongs to heaven, the body to earth” (Texts of Pyramids, Utterance 305). “The body to earth” is a funerary dogma confirming that:

At the time, if the body of the pharaoh was buried above the ground level, it would be a great heresy. In fact, in all tombs of Ancient Kingdom, the funerary chambers were built under the ground level. Why is the Great Pyramid an exception? Was Khufu really the first heretic pharaoh of the Ancient Egypt? And why have Egyptologists never worried about this essential detail—one that can shed light on the mysteries of the Pyramids?

A very easy Aristotelian syllogism can help for a better comprehension:

There is no doubt that the conventional finds analysis has been managed too freely. It lacks the capacity to link all items of investigation, in order for consistent results to be obtained. Debates about pyramids should always have a rational component, but when Egyptologists insist upon conclusions rebutted by the facts, it means that someone wants to push certain conclusions.

If the pyramid really was the last abode of Khufu, it means that the pharaoh did not follow the Ancient Kingdom funerary rules and thus must be considered a heretic, much like Akhenaton when monotheism was introduced during the Middle Kingdom. If Egyptologists don't know that, they have stumbled into something much bigger than they can understand and, therefore quite a lot of theories have to be corrected, including the pyramid’s primordial destination.

It’s time to confine the Great Pyramid in its own historical time: the Zep Tepi.

At the same time, we must strike a blow against Egyptologists whose jobs took place in relatively comfortable manners, unchallenged.

Academic Egyptologists claim that the pyramids of Giza are funerary complexes, that is to say, the final resting places of the pharaohs of the Fourth Dynasty, along with their wives and dignitaries. I believe that this is only partly true, that the Fourth Dynasty pharaohs used structures made earlier.

In my opinion, the pyramids of Giza originally were built to document and communicate the scientific knowledge of a pre-historical and unknown society. The existence of the three chambers and of the Djed inside the Great Pyramid is not accidental. Instead, they are part of the specific, cosmological, and theological concepts the builders wished to document and communicate. What was the essential purpose? To document their history? Or, did they want to leave a “message” a “code” for whatever civilization might follow them? A kind of time capsule?

I believe that in the course of time the initial purpose of the pyramids was lost and the constructions were utilized as tombs of the later pharaohs. This would give some credibility to the reasoning of academics, while recognizing the initial role of the monuments of Giza.

In the last two centuries, many fairy tales about pyramids have been published. At this, the beginning of the new century, it’s time to apply new scientific patterns. It’s time to open the door to a scientific overview of the Giza Plateau, because we cannot let the history of mankind get away.

Last year, I published results of my investigations about the monumental complex of Giza, and the first question was: how is it possible that Egyptologists haven’t noticed that the funerary chamber inside the Great Pyramid conflicted with funerary rules in force during the Ancient Kingdom?

Sometimes all it takes is a little bit of attention to be ready to understand the meaning of the ancient message coming from the distant past of mankind, when the gods ruled over the Egypt and the Giza complex, when the monuments of the pyramids and the Sphinx were the mirror of the sky.

Maybe Khufu was never buried within the Great Pyramid—maybe he wasn't a heretic as it seems. But just only a scientific investigation, with an open mind, can help us to understand the truth.

To find out more about available books and in-depth research, visit the official website of author Armando Mei, www.armandomei.com

Featured image: Is the Pyramid of Giza the final resting place of Khufu as claimed by Egyptologists? Deriv; Pyramid of Giza (CC BY 2.5), Khufu (Ivory Idol, Public Domain).