The Fierce Mythical Unicorn Travelled the World and Through Cultures, Killing and Healing

Legend speaks of a powerful creature, a wild beast that is both an unpredictable, deadly foe and a gentle and innocent spirit. The unicorn, a creature with a single, spiraling horn centered on its forehead has become one of the most popular and enduring of mythological creatures. Like dragons, they are unique legendary figures with an image that is instantly recognizable all over the globe, with tales reaching back through ancient epochs.

Stemming from text mistranslations and misunderstood travelers’ tales, stories of the elusive creatures cemented their place in ancient record and oral traditions, demonstrating a long and rich history in legend since antiquity, and which continues today in modern popular culture. The modern mythical beast is now generally described as a perfect white steed with a tapering horn projecting from its forehead. It is said to be beautiful, pure, and magical, which visits or defends young girls specifically.

At once time, however, the unicorn was not the lovely creature we know today. Rugged, beastly, four-legged animals with a dangerous horn and strange powers were described by various ancient writers in accounts of natural history. Original accounts of the creature were not mythical or religious creations, but were instead found in ancient natural history texts by Greek and Roman writers. Historians, natural scientists, and physicians believed the unicorn was a real animal which lived in the largely mysterious ancient India, based on traveler accounts from the region.

Greek historian Ctesias in the fifth century first wrote in his book Indika, (“On India”), that unicorns were wild asses or onager—small equine animals which still exist today. But he held they were colored white, red or black, and they had a horn about 28 inches (71 centimeters) long. 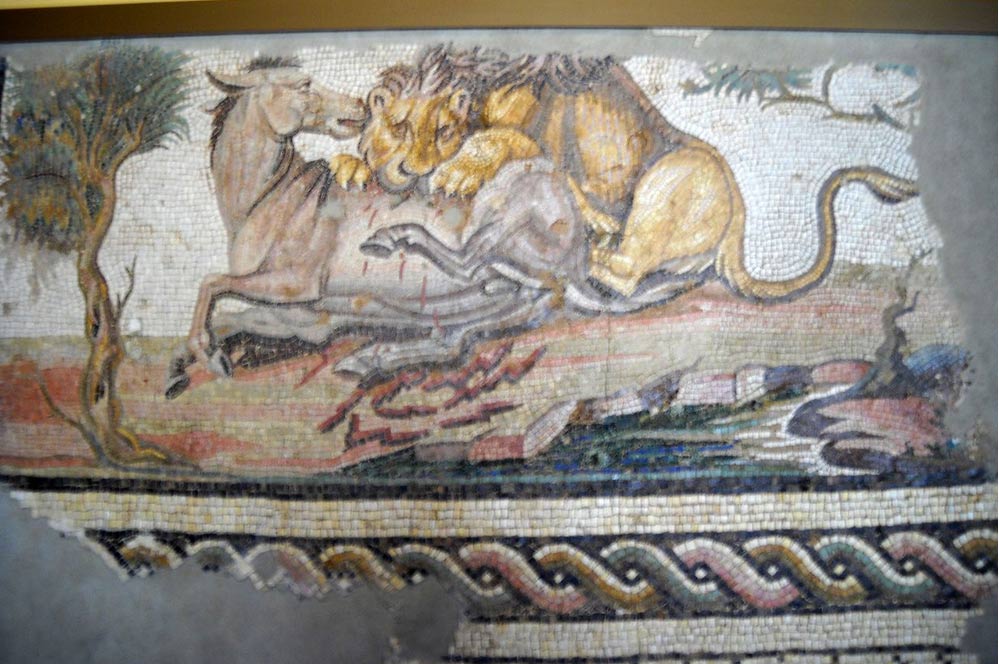 It’s believed other authors drew from Ctesias’ work as fact, and added further details. Aristotle wrote about a one-horned animal called the oryx (a type of two-horned antelope,) and the “Indian ass”. Similarly, Strabo recorded that there were one-horned horses in the Caucasus.

Pliny the Elder mentioned the oryx, and an “Indian ox”, and described them as one-horned beasts. He wrote about, “a very fierce animal called the monoceros which has the head of the stag, the feet of the elephant, and the tail of the boar, while the rest of the body is like that of the horse; it makes a deep lowing noise, and has a single black horn, which projects from the middle of its forehead, two cubits [900 mm, 35 inches] in length.” 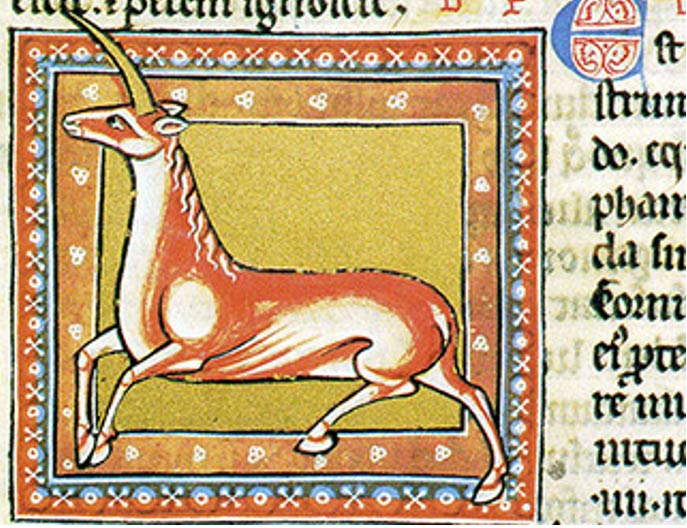 The monoceres, from the Greek accounts, depicted in the 12th or early 13th century Ashmole Bestiary. (Public Domain)

It’s now believed these accounts were likely describing the rhinoceros, but word of such strange and marvelous creatures spread across the continents, and through the centuries, morphing and shifting into various beliefs and stories. 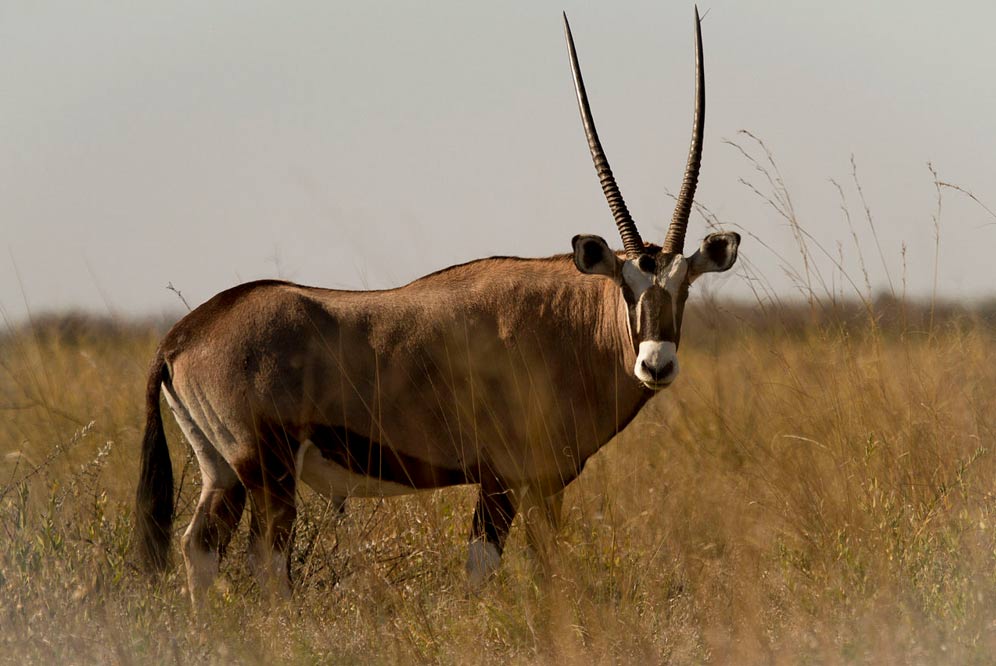 The oryx (Botswana, Africa). Did this animal inspire accounts of the unicorn? (CC BY-SA 4.0)

A sixth century merchant of Alexandria, Cosmas Indicopleustes, wrote works on cosmography (mapping the general features of the cosmos or universe) after his return from a voyage to India. He described seeing bronze unicorn figures decorating the palace of the King of Ethiopia. He reported, “it is impossible to take this ferocious beast alive; and that all its strength lies in its horn. When it finds itself pursued and in danger of capture, it throws itself from a precipice, and turns so aptly in falling, that it receives all the shock upon the horn, and so escapes safe and sound.”

Ancient seals from the Indus Valley civilization seem to corroborate these sightings, as they depict a one-horned animal. These seals were thought to be a mark of high social rank. But did they show a unicorn, or the profile of a bull? 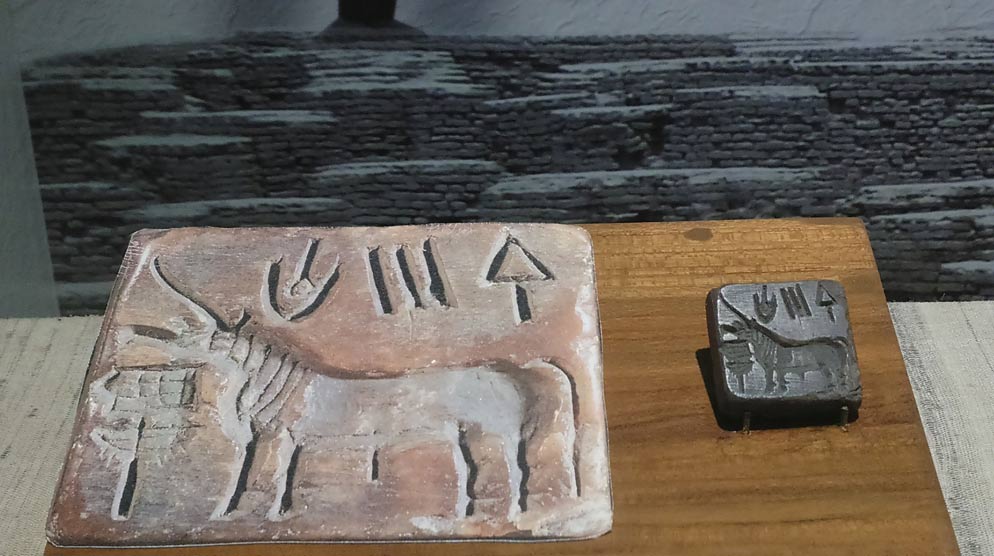 An animal called the re’em appears several times in the ancient Hebrew Bible, and was later misidentified and translated as ‘unicorn’, when the Hebrew word actually referred to aurochs, ancestor of domestic cattle. The unicorn creature was later incorporated into the King James Bible as a protective animal and innocent Christ-like symbol. 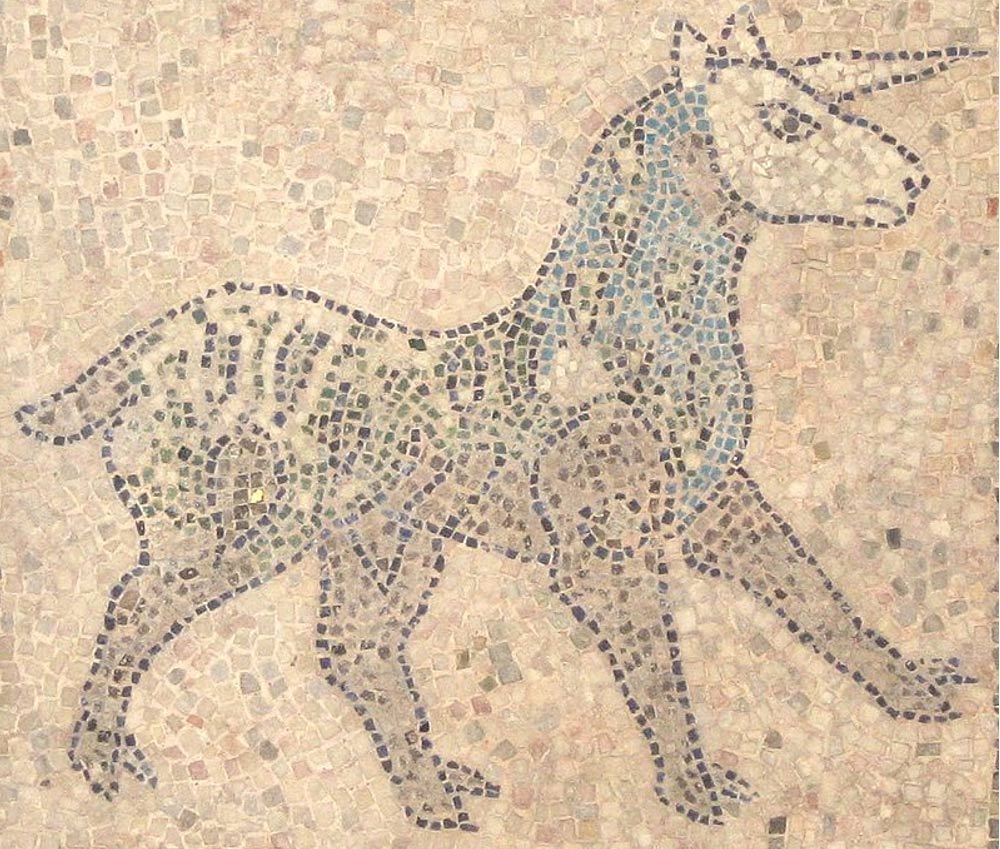 The Creature of Ancient Eastern Tradition

Independently in the east, horned beasts of legend established themselves, such as the Qilin. This Chinese mythical creature is now often equated with the unicorn, but the two differ in many ways. The earliest references to the hooved and horned animal was in the fifth century BC, in the narrative history Zuo zhuan by Zuo Qiuming. Originally a fire- or scale-covered beast with deer antlers, and sometimes tiger-like, the description of the Qilin shifted to resemble a more passive, giraffe-type creature after voyager Zheng He's travels to East Africa and experiences with the fauna there. Even now the word Qilin means giraffe (not unicorn) in Japanese and Korean. 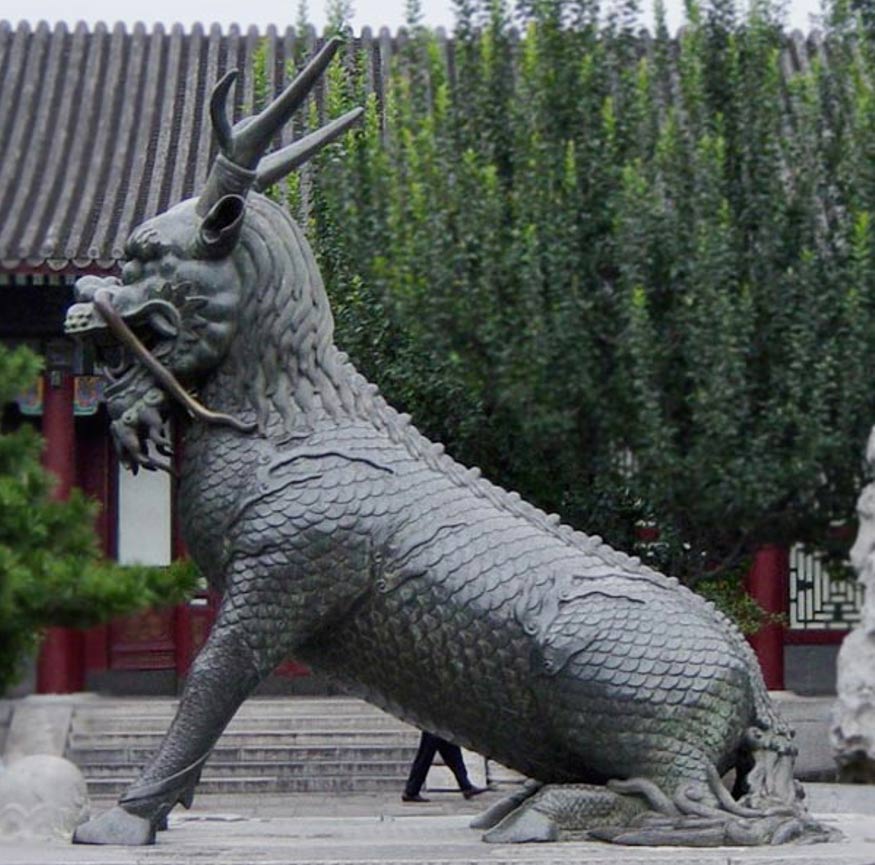 By the Middle Ages the mistranslated biblical references and ancient sources had inspired a whole catalogue of mythical knowledge on the unicorn, reaching the peak of influence. Stories were handed down through the generations and were included in folklore, religious art, and bestiaries—illustrated collections of the real or mythical animals of ancient natural history. 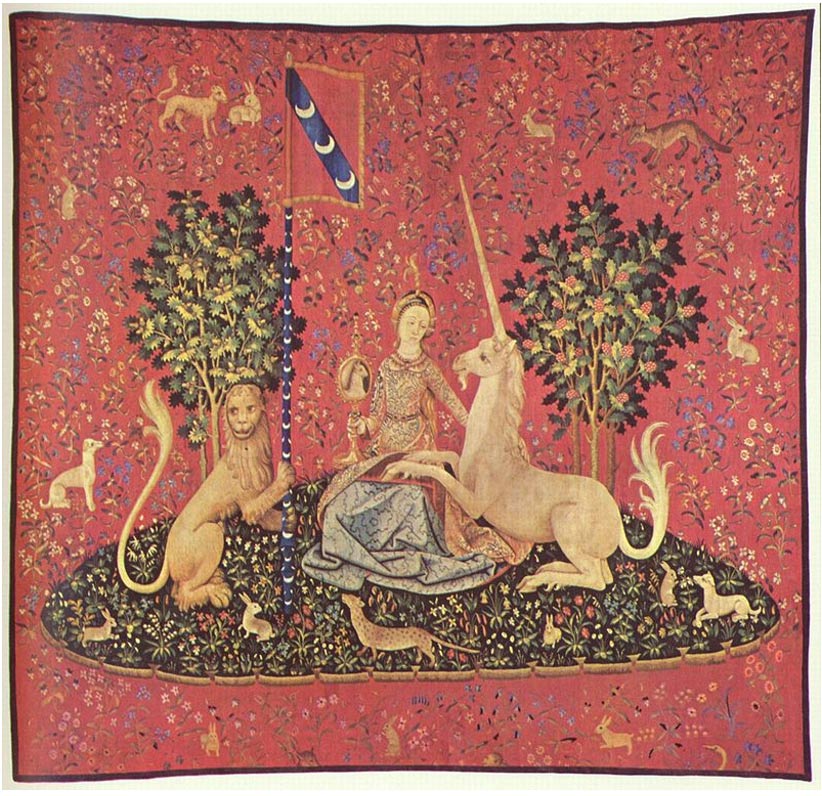 The Powerful and Magical Beast of Myth and Religion

According to European folklore, the unicorn was a horse or goat with a lion’s tail and cloven hooves (or sometimes soft paws and a goat’s beard). It was a wild woodland creature with a hostile nature, and it defended itself with ferocity, biting with teeth, kicking with hooves, and goring with horn. However, it was so fleet of foot that no hunter could catch it. So elusive was it that it took on the glamor of astounding longevity, or even immortality, in some versions of the tale. 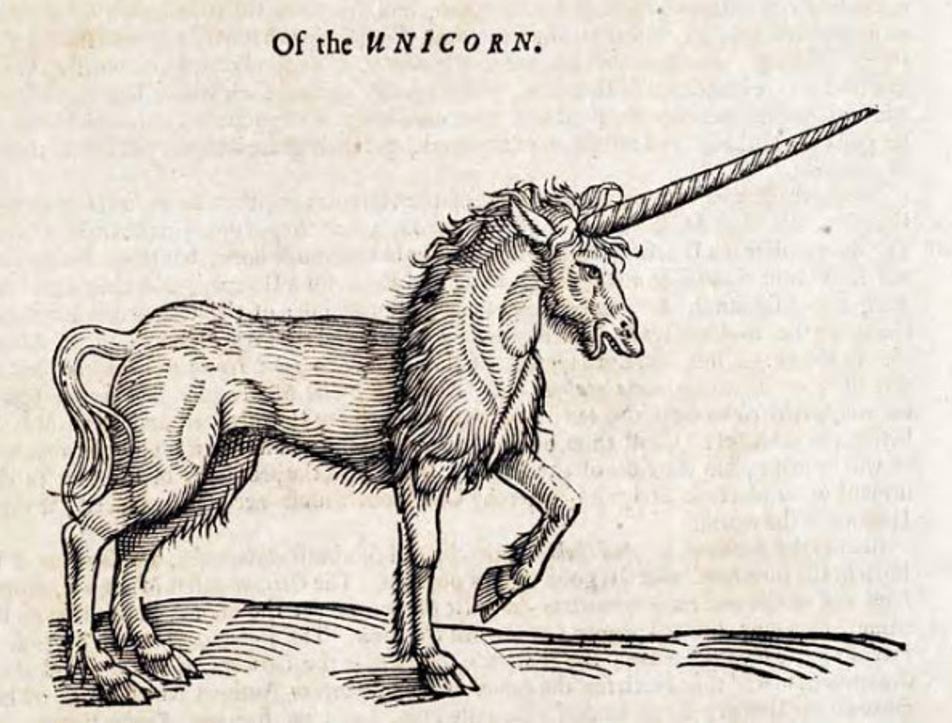 The ferocious unicorn was no timid creature. (Public Domain)

The unicorn was associated with royalty and heraldry, and even now it is the National Animal of Scotland. It was felt the unicorn was mortal enemies with the lion, and if they met they would battle to the death. This theme would be used as an allegory for political fighting in later history, and both the lion and the unicorn serve as heraldic beasts that are featured on many emblems, symbolizing regal standing, innocence, boldness, pride, intelligence, virility, and healing, and even immortality.

The unicorn’s association with young women was believed to be a strength as well as a weakness. A young, pure (virgin) girl could attract and tame the wild unicorn with her innocence, so it was said. This would enable hunters a chance to capture the beast while it was unaware. Famous polymath, artist and inventor Leonardo da Vinci wrote in one of his notebooks: “The unicorn, through its intemperance and not knowing how to control itself, for the love it bears to fair maidens forgets its ferocity and wildness; and laying aside all fear it will go up to a seated damsel and go to sleep in her lap, and thus the hunters take it.”

Biblical mentions of the unicorn portrayed it as a strong warrior and protector, enemy of lions, virile, a healer, and a symbol of Jesus to Christians of the day. It was felt that the relationship between the chaste and pure Virgin Mother, Mary, and Jesus was displayed through the young girls and unicorns. Mary was thus frequently depicted in art with a unicorn head in her lap. 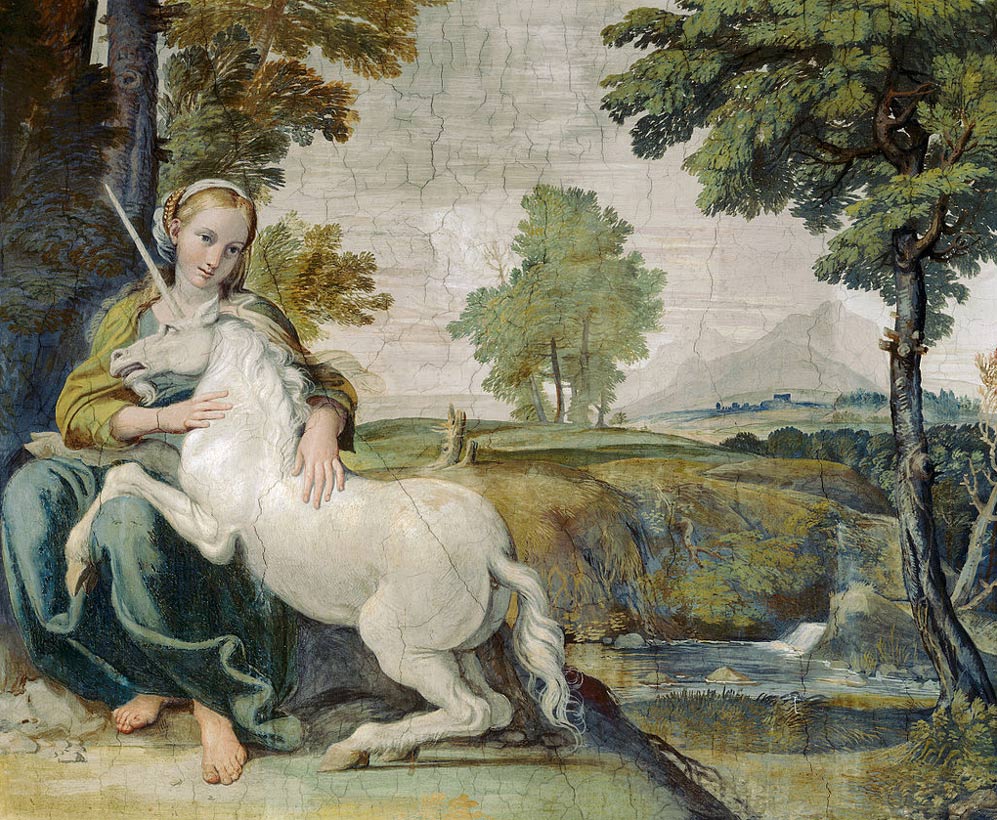 A symbol of purity, its horn, dubbed “alicorn”, was believed to have the power to clean poisoned water and to heal the sick. So alluring was this supposed healing ability that during medieval and Renaissance times the very rare and highly prized (and expensive) ground unicorn horn, or tusk of the narwhal (mondon monoceros, a one-horned whale,) was ground up and sold to the sick. It was also believed it would make teeth pearly white. 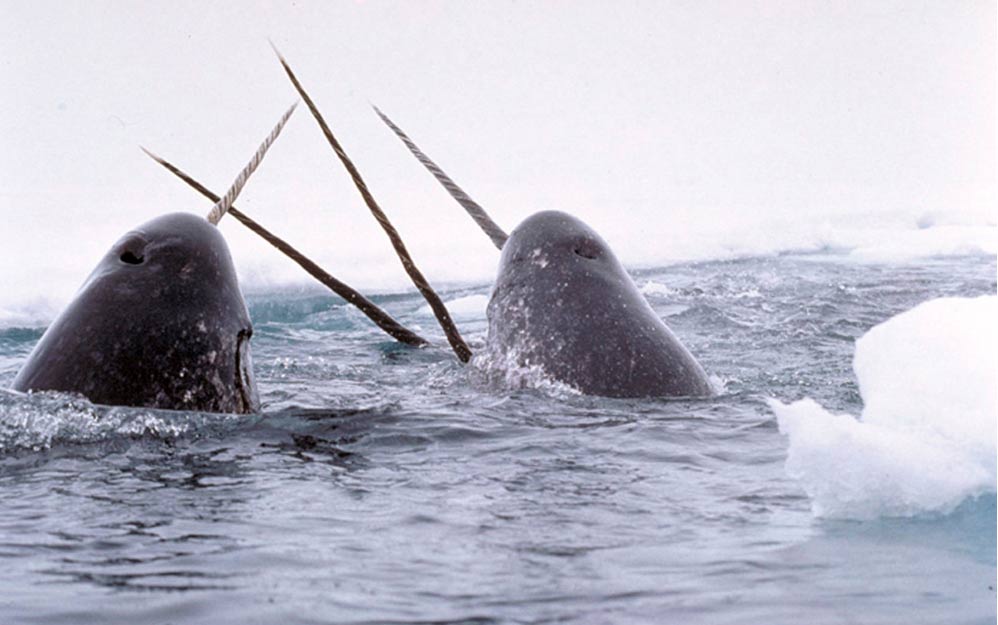 The Throne Chair of Denmark is said to be made of “unicorn horns,” but is in fact made with many narwhal tusks. Narwhal was used to create many important artifacts, such as ceremonial cups, as the reputation of the horn for neutralizing poisons was widely believed. The Legend Known around the World

Countless tales of the unicorn and similar beasts have toured the world since antiquity.

The ancient Chinese Qilin was seen as a good omen, promising prosperity, protection, success, and longevity. It was said to appear just before the imminent arrival or death of a great ruler. As it was eventually connected with the giraffe, it took on the attributes of vegetarianism and a peaceful, quiet nature. It was said it could walk on grass without disturbing it, and their voice sounded like the tinkling of bells. The Kirin of Japanese and Korean folklore is closely related to the Qilin. 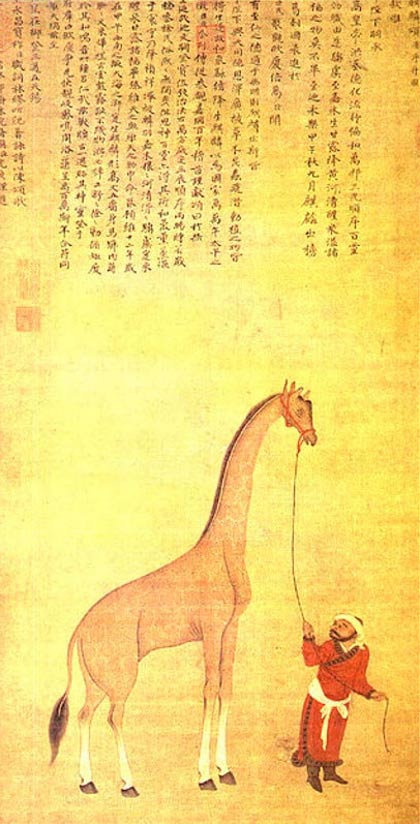 The pet giraffe of the Sultan of Bengal, brought from Medieval Somalia, and later taken to China in the twelfth year of Yongle (1415). It is said the giraffe was thought to be a Qilin by Chinese court officials. Public Domain

Like the unicorn, the Al-mi’raj was a horned, yellow rabbit of 13th century Islamic poetry. The mythical, harmless-looking bunny was said to have a two-foot (30 centimeters) long, spiraling black horn in the center of its forehead.  According to legend, the wickedly fierce beast was a nasty predator with a huge appetite and it would slaughter animals and people with its sharp horn, devouring them easily. Traditionally, it is said people would use wards cast by witches to repel the dangerous killer.

Russian folklore has their own version of the unicorn, called the indrik. In stories, the indrik was the king of all animals, and lived alone at The Holy Mountain. This giant bull had the head of a horse and the slight, powerful legs of a deer. It was said to sport a giant horn on its nose, somewhat resembling a rhinoceros. The story of the Russian indrik inspired the name of the Indricotherium, a very real creature, now extinct, which was the biggest land mammal to ever exist on earth (34–23 million years ago). The horn of the camahueto from the mythology of the Chilote (south of Chile) was believed to cure male impotence when mixed into a potion of apple cider and seawater. The camahueto was said to be a small calf or bull with a single horn projecting from its forehead. It was believed that one drink also restored the vitality of older men, and caused them to feel powerful like Hercules.

The Shadhavar of Asia Minor (Anatolia) was a creature of medieval Muslim zoological writings. It was believed the beast had one horn with 42 hollow branches. These branches would make a beautiful sound when the wind passed through them. The horns could also be played like a flute, and were so valuable they were gifted to Kings. Legend had it that when the horns were played from one end they made a happy sound, and when played from the other, the mournful tune would cause grown men to weep.

Even the night sky reflects humanity’s love of the unicorn. The constellation Monoceros (one horned) situated on the celestial equator was charted in the 1600s by Dutch cartographer Petrus Plancius. The constellation Monoceros, depicted on a star chart. 1825. (Public Domain)

The legendary unicorn has travelled through time and around the world, appearing in myths and historical accounts, blurring the lines between the natural world and the supernatural realm. It has secured its place even in contemporary society. The unicorn qualities of fierce strength, innocence, and magical healing were powerful attributes in ancient society, and are valued still today. The unicorn is at no risk of dying out—the legend possesses longevity that matches the supposed immortality of the beast itself.

The Economist. “Horn of plenty: The unicorn and its mythology” 2013. Economist.com [Online] Available here.