Located in the Province of Florida, Department of Santa Cruz, the archaeological site of Fuerte de Samaipata consists of two clearly identified parts; the hill with its many carvings, believed to have been the Ceremonial Center, and an area to the south of the hill, which formed the administrative and residential district and the political administration. An overview map of Samaipata in Bolivia.

The site is known to have been occupied and used as a ritual and residential center by people belonging to the Mojocoyas culture from the Amazon basin to the east as early as 300 AD, and it was at this time, archaeologists contend that work began on the shaping of this great rock. It was later occupied in the 14th century by the Inca, who made it a provincial capital. The latter is confirmed by the features that have been discovered by excavation; a large central plaza with monumental public buildings around it and terracing of the neighboring hillsides for agriculture; which are characteristic of this type of Inca settlement seen especially in the highlands of Peru. It formed a bulwark against the incursions of the local indigenous and warlike Chiriguanos of that region in the 1520s.

The strategic location of the site, which had attracted the Inca to it, was also recognized by the Spaniards. The silver mines of the Cerro Rico at Potosí began to be worked in 1545 and the colonial settlement of Samaipata became an important staging post on the highway from Asunción and Santa Cruz to the colonial centers in the High Andes such as La Plata (modern Sucre), Cochabamba and Potosí. With the establishment of the new town of Samaipata in the Valle de la Purificación, the ancient settlement had no further military importance and was abandoned. 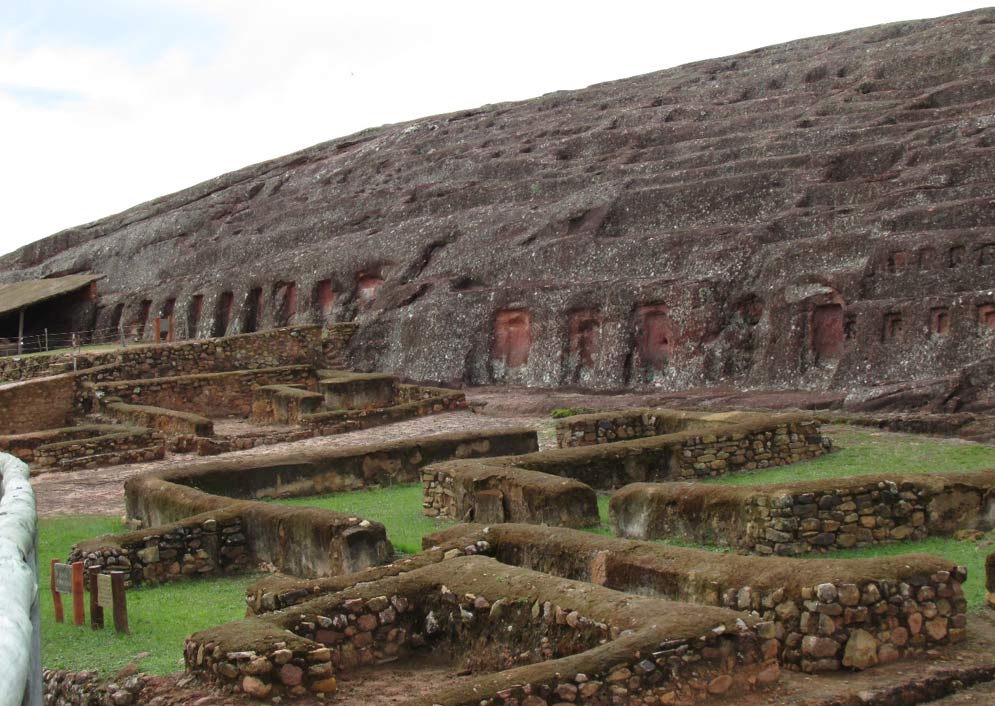 Inca works in the foreground at Samaipata.

The Ceremonial Center consists of a huge monolithic rock of red sandstone of dimensions 220 meters (721 feet) long and approximately 60 meters (197 feet) wide, fully sculpted with a variety of representations of animals, geometric shapes, alcoves and channels, executed by specialist craftsmen, sculptors, with great skill and mastery of the material. However, archaeologists again presume this initial work was done by the relatively primitive Mojocoyas culture of the Amazon, yet seemingly have no evidence of such works having also been created in their homeland. This monument, dominating the town below, is one of the most colossal ceremonial pre-Columbian works of the Andes and the Amazon regions. 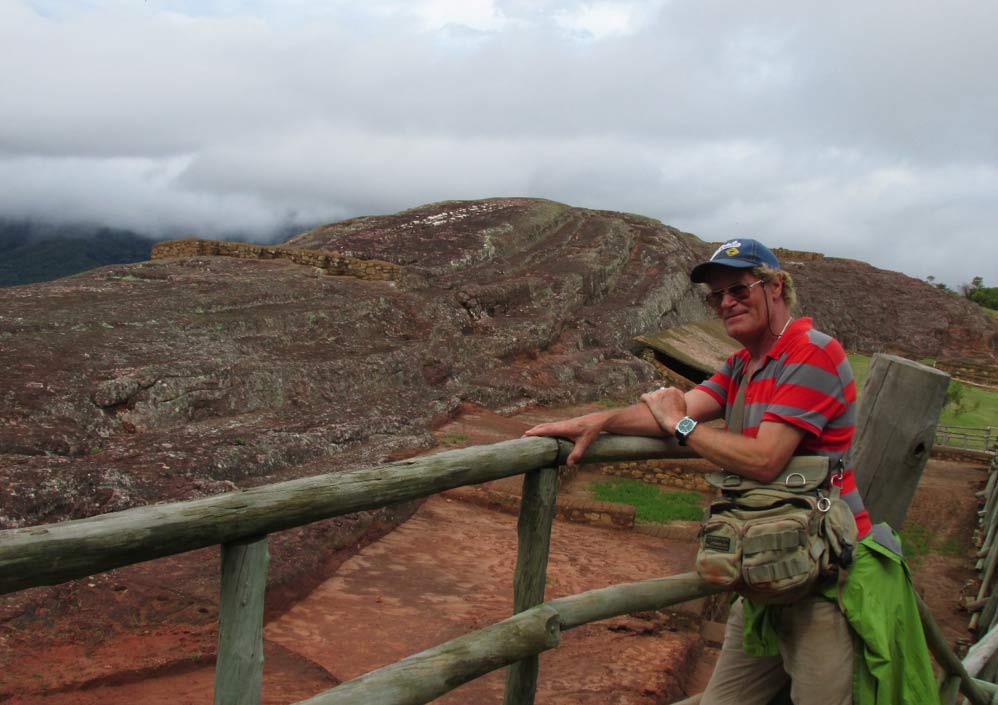 The author and a red sandstone outcrop.

It is a unique testimony to pre-Hispanic traditions and beliefs, and has no parallel anywhere in the Americas. And yet a primitive Amazonian tribe, with seemingly little or no previous stone cutting experience, spontaneously produced it? Just because some artifacts of the Mojocoyas may have been found at Samaipata, it is a great leap to suggest that they were responsible for all of the deep carving into the red sandstone bedrock.

The carvings in the western part include two felines on a round base, the only examples of high-relief carving in the whole site. The remains of a stone wall of the Inca period cut across a number of the carvings, indicating a pre-Inca date. These include two parallel channels, and between and alongside them there are smaller channels cut in zigzag patterns, giving rise to the local name for this feature, The Back of The Serpent. 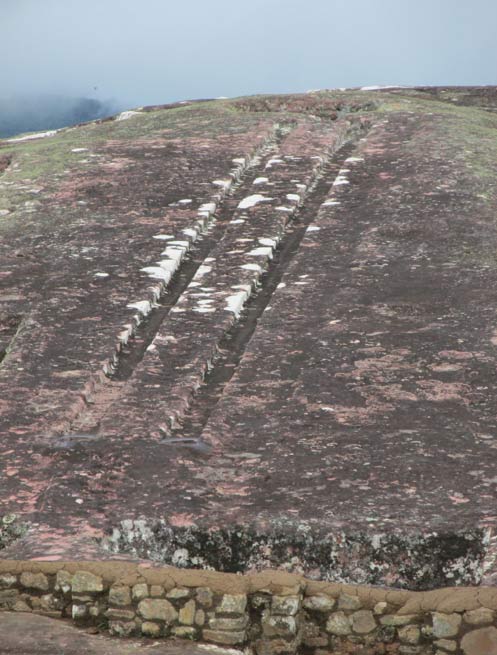 The so-called runways at Samaipata.

The presence of the Inca in the area is clearly obvious, as typical stone and mortar constructions found at Samaipata are the same as can be found in the Cusco area, as well as other known Inca sites found in other parts of Peru, Bolivia, Ecuador, Chile and Argentina, as well as possibly in Paraguay. The administrative and political sector of Samaipata is situated on a series of three artificial platforms to the south of the great carved bedrock area. It is made up of a series of architectural structures corresponding to different periods of cultural settlements; the Acclahuasi or “house of the chosen” (housing for women whose role was to make the clothes and food of the Inca), the compound Kallanka for military use, the "Court" or commercial area which was used for the exchange of products, Tambo, a space for the provision of arms, clothing and utensils, and a less complex terraced area for agricultural crops and residential areas used for surveillance.

The Casa Colonial is situated on an artificial platform at the foot of the rock. Excavations have revealed evidence of Inca and pre-Inca structures here, and so it is known as the Plaza of the Three Cultures. This house of the colonial period, only the stone lower walls of which survive, is in characteristic Arab-Andalusian style, with a central open courtyard.

As the Inca and Colonial periods of Samaipata are somewhat obvious and are backed up by archaeological research which can clearly compare their artistic, construction and other attributes with other known sites of those cultures, the most fascinating and enigmatic aspect of the area is the massively carved red sandstone surface. The deeply carved niches could possibly have been done using perhaps hardened bronze and or meteoric iron tools, as the sandstone itself at this location is not as densely compact as in other places on the planet, such as Tiwanaku and Puma Punku in Bolivia. However, archaeologists have shown no evidence that the Amazonian Mojocoyas were metallurgists. The Inca are known to have been somewhat skilled at producing bronze tools, and shaping meteorites, largely found in the Cusco area into quite hard implements for limited stone shaping, but they are not believed to have done the work at Samaipata. 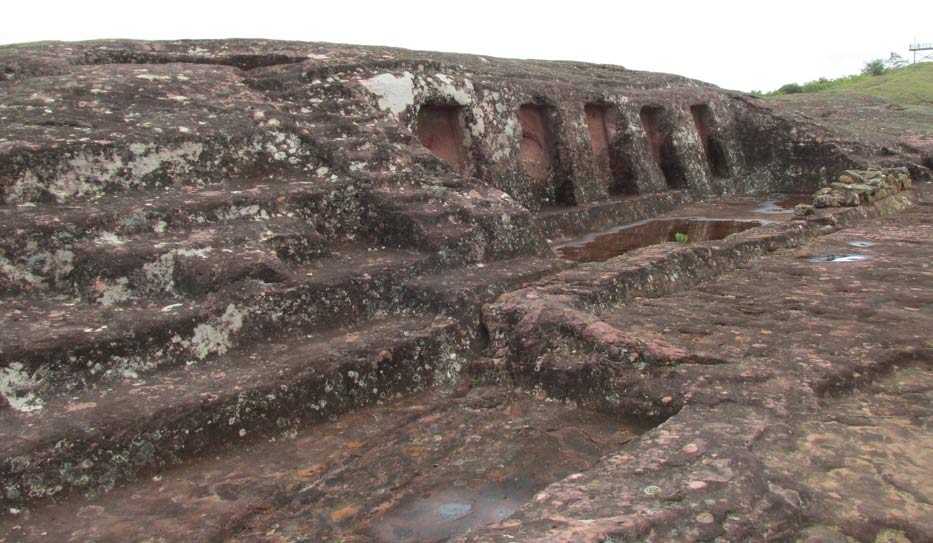 Niches and stairs as seen in the rock.

Therefore, we can only logically conclude that the shapers of the bedrock at Samaipata are presently unknown, and thus we can also not presume when the work was done. As the Mojocoyas, Inca and Colonial Spanish can be ruled out, it is thus presumable that such work was done prior to 300 AD, but by whom? The area is high jungle, and thus subject to extensive rainfall which would gradually erode the sandstone, however no studies of weathering have seemingly been conducted by geologists. 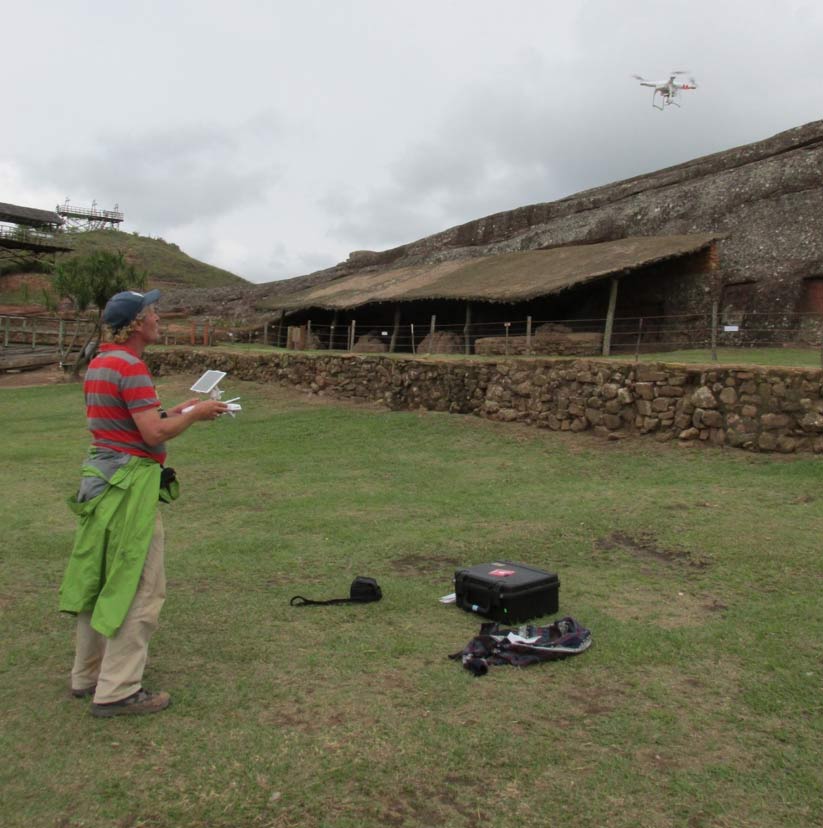 And this opens up a controversial idea. Is it possible that a culture possessing technology more advanced than even the Inca or Colonial Spanish could have been responsible? Although all of the fine stone works prior to the arrival of the Spanish in the Inca capital of Cusco are claimed by most academics as being the achievement of the Inca, who presumably arrived in the area at about 1100 AD, there are some creations which clearly they were not capable of. As previously stated, the Inca were reasonably adept at creating bronze and meteoric iron tools. With these they could roughly shape stone and produce the andesite stone walls, made by mixing with clay mortar which can still be found in the Inca capital and environs. However, the much more refined works we see in Cusco, and at other major sites such as Ollantaytambo, Sachsayhuaman and Machu Pic’chu were simply beyond their technical capabilities.

The megalithic polygonal works, sometimes employing stones as large as 10 to 20 tons, and in the case of the zigzag wall of Sachsayhuaman as great as 125 tons, still fit together technically as almost perfectly, with any present day gaps being the result of earthquake damage. As little, if any, original tool marks are present at the contact surfaces, we can presume that these achievements were done prior to Inca times, since obvious Inca works in the same local, using stone with clay mortar show the bruising of repeated strikes with possibly meteoric, and less likely bronze tools. 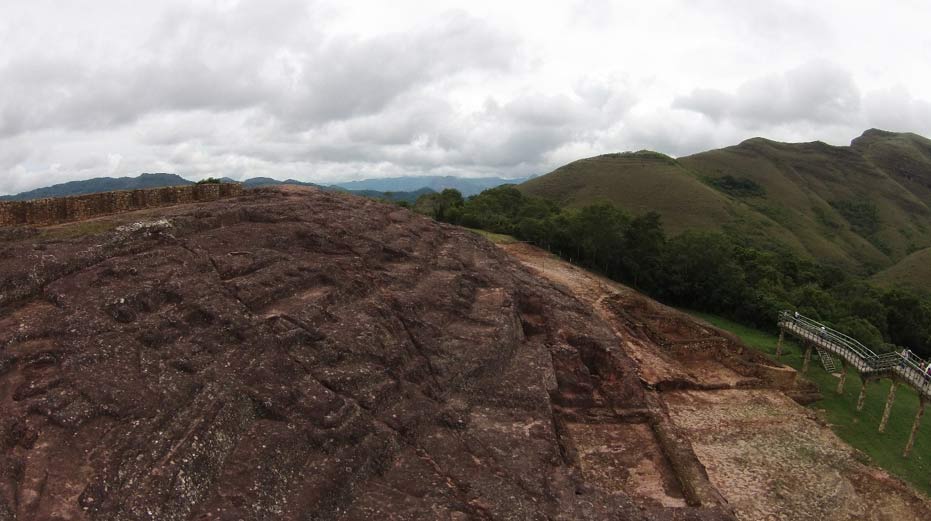 Aerial view of the site.

No engineer, nor stone mason that has visited the megalithic sites with the author has been able to explain how such Inca tools could have finely shaped these stones, especially those of red granite that we find at Ollantaytambo, basalt at the Coricancha in Cusco, or white granite in the core area of Machu Pic’chu. In fact, all of the above experts reject such an idea, as bronze and meteoric iron are softer than the stones cited. It would be “like trying to cut down a tree with a plastic knife.”

So, we can only conclude that the megalithic works in the Cusco area were not the work of the Inca, certainly not that of the Spanish, and of no other known culture. When the Spanish first arrived in the city and saw the monumental works of the Sachsayhuaman megalithic marvel, they asked the local Inca people if they or their ancestors had been responsible for such constructions. The answer was that these works were there when the Inca arrived, again presumably around 1100 AD. If this is indeed the case, then Cusco’s megalithic constructions were made by a people unknown to archaeology, but, known to local wisdom keepers. 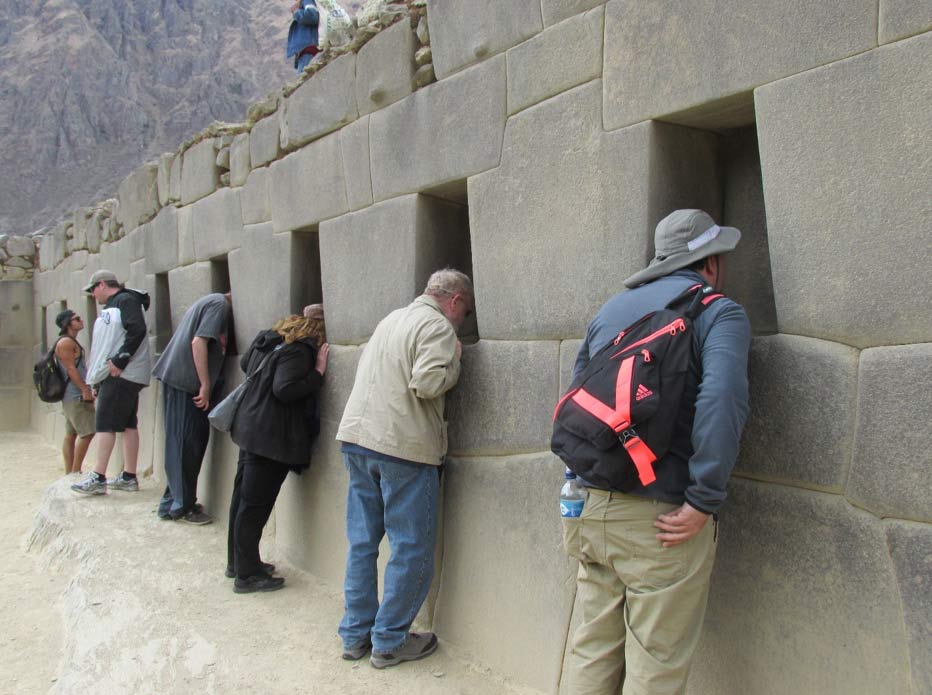 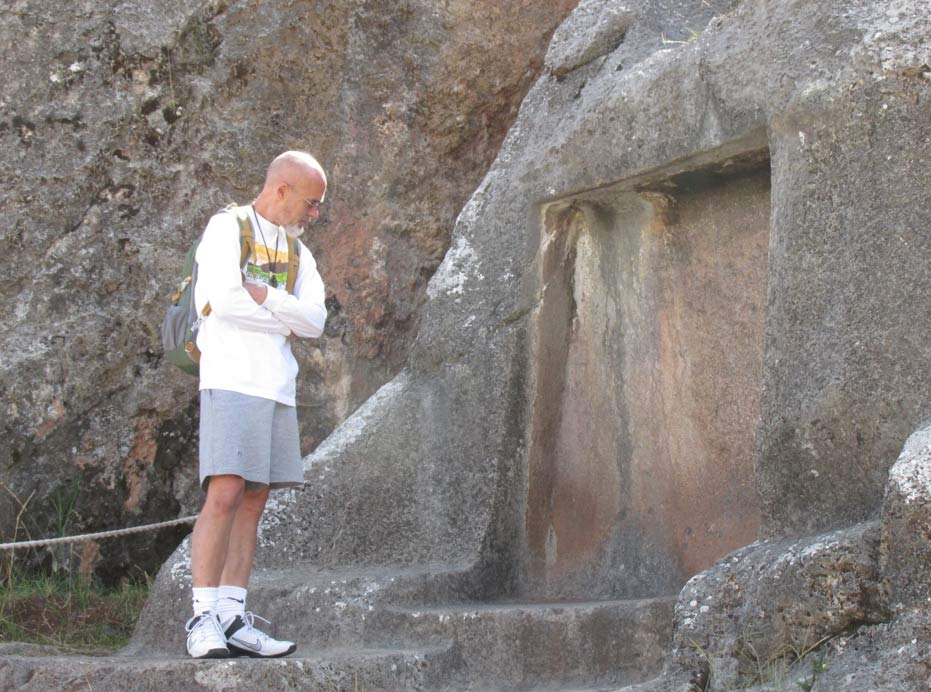 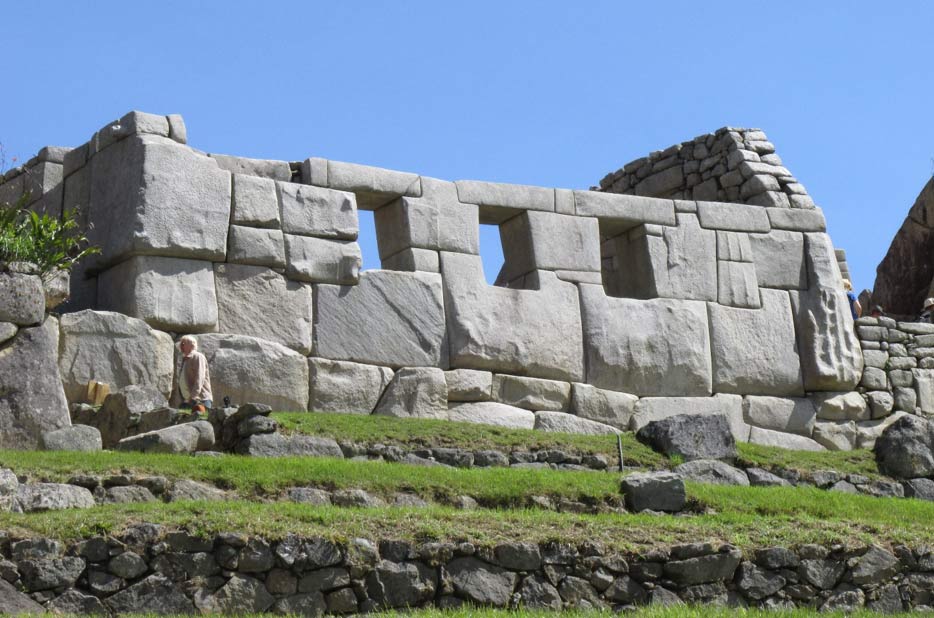 If one asks the average Peruvian or tourist where the name Peru comes from, you would likely be met with blank stare. Bolivia was named after Simon de Bolivar, Ecuador after its location on the equator, and Argentina means “little silver.” But Peru? When Spanish conquistador Francisco Pizarro was in Panama, he learned from local chiefs the location of a land of vast riches to the south, where people were so well off that they ate from plates of gold. That land was called Peru, inhabited in the distant past by people of immense skill called the Perhua or Piruha. It is they who are believed to have been the creators of the megalithic marvels whose remnants we can still see in Peru today, especially in Cusco and the nearby Sacred Valley. When they existed is not explained by the oral traditions, but clearly was before the Inca first entered Cusco, as, again, they did not find virgin terrain there but the remnants of a once great megalithic center.

In fact, most if not all of the main Inca ceremonial works are located at sites previously occupied by the megalithic Perhua, including Sachsayhuaman, Ollantaytambo, Machu Pic’chu and Cusco itself. We can see, even today, five hundred years after the Colonial Spanish brutally destroyed many of the great works of the Inca and Perhua for their own constructions that Inca works were blended into the achievements of the Perhua in a harmonious and seemingly reverential manner.

And so, returning to Samaipata, it would appear that Inca may have established a base in this location to strengthen one of the eastern borders of their Tawantinsuyu (Four Quarters Of The World) by which the Inca confederation was known. Contrary to what most academics and tour guides presume, and the product of poorly written Spanish chronicles often based on little local knowledge and their clear prejudices, the Inca world was a confederation of states with Cusco as the capital, not an “empire.” They may also have been as profoundly impressed with the works they found sculpted into the sandstone at Samaipata as much as those made by the Perhua in Cusco and the Sacred Valley and thus decided to establish their own presence at Samaipata out of reverence for the mysterious ancient ancestors of the area.

Clearly, it would be very beneficial for geologists experienced in stone weathering to ascertain when the red sandstone was initially sculpted, and for engineers or machinists to figure out what level of technology was involved. The author plans on visiting this enigmatic site as many times as it takes to achieve what academics so far have not. 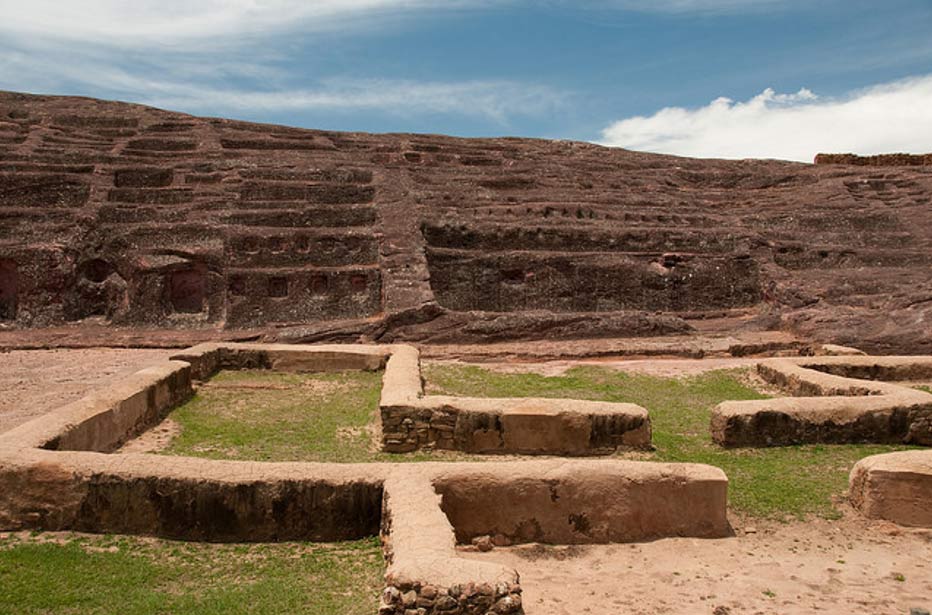 Brien Foerster thoroughly explores the answers to these questions in his book ‘Lost Ancient Technology of Peru and Bolivia’. Click here to find out more about his book, or visit his website hiddenincatours.com